with BALANCE’s  “ONLY REAL SOLUTION”—IF WE ACT NOW

Just a few days NOW, and then a few weeks in 2017 could make or Break the U.S. Population Stabilization Movement.

Mass Immigration, now nearly 90% of U.S. population growth, has been The Major Cause of the USAs population soaring from 150 Million in 1950 to over 330 Million today. That growth is accelerating due to demographic momentum. 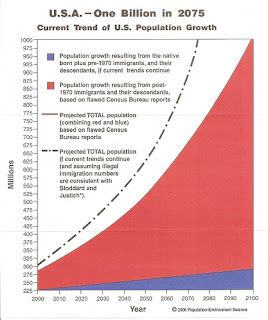 And if Illegal Immigration and Mass Legal Immigration of about 1.5 Million/year is not dramatically reduced, the USA’s population will indeed hit ONE BILLION IN 2075 as BALANCE warned a decade ago (A population increasing at 2%/year doubles every 35 years!)

So we have only a few weeks or at most a very few months in 2017 to ensure that Provisions dramatically reducing the numbers of Legal Immigrants get included in the upcoming immigration legislation aimed at halting Illegal Immigration  and get enacted into law.  With President Trump and Attorney General Sessions we have a Real Opportunity to achieve this IF WE ALL PUSH BALANCE’s REAL SOLUTION.

That is, go all-out to push a ZERO-NET MORATORIUM on LEGAL IMMIGRATION. That Maximizes Political Pressure, as well as being the Necessary Condition for ever achieving U.S. Population Stabilization, and all the benefits which come with it including Environmental Protection, Job and Budget Protection and Indeed Personal and National Security.

Pushing anything less than an MORATORIUM is COUNTERPRODUCTIVE because it sends the Message that Mass Immigration is OK if we just tweak it w bit. ONLY BALANCE and its ASAP Coalition Allies push a Moratorium!!

But WE have only  A FEW DAYS LEFT IN 2016 to obtain sufficient (Tax deductible for 2016!) Donations to Maximize our chances of Success in 2017!! It may well be our last Opportunity, given Political Realities!

SO PLEASE DONATE AS MUCH AS YOU ARE ABLE BEFORE THE END OF THIS YEAR … And remember how much is at stake!

BALANCE is anti-Mass-Immigration, not anti-immigrant.

BALANCE is the leading National Organization publicizing information regarding the
Threat of Mass Immigration-generated population growth to our Environment, Nation, Budgets, and Personal Safety and Mobilizing Activists to Reduce it.
Posted by Population-Environment Balance at 2:07 PM No comments:

LAST GREAT OPPORTUNITY FOR U.S. POPULATION STABILIZATION
—THE ONLY STRATEGY FOR SUCCESS—
BALANCE DECEMBER ALERT
The Election of Donald Trump to the Presidency creates the Last Great Opportunity for achieving eventual U.S. Population Stabilization, especially since one of President-elect Trump's main advisors on Immigration Policy and now the prospective Attorney General is Senator Jeff Sessions (R-Ala) who favors substantial reductions in legal immigration as well as stopping Illegal.    But these two gentlemen can not achieve dramatic reductions alone;  they need thousands of activists including BALANCE activists to push Congress to cooperate by implementing The Only Strategy for Success.
The Only Strategy is simple.  Inform your Representatives of The Facts and provide them with The Solution.  So first, The Facts

Pushing a Zero-Net Moratorium is key as an objective because it is reasonable and Essential for long-term Environmental and Personal Protection and for providing Sufficient Resources, INCLUDING WATER and FOOD and Money, for survival. Today, we are in the process of exceeding our long-term Carrying Capacity. We must Reverse Course NOW!

In sum, a Zero-Net Moratorium is The Necessary Condition for achieving U.S. Population Stabilization, long term Environmental Protection, Budgetary Solvency in State and Local Government (especially for our Health Care and Educational Institutions), Tax Reduction, Unemployment Reduction, Social and Cultural Cohesion and Personal Safety … and for protection of our Food and Water Supplies!

Mass Immigration is thus NOT “Just about the Numbers” as one Management Group claims. WE ARE FACING A MANY-MONTHS-LONG SERIES OF BATTLES ON THESE ISSUES, extending well into 2017. So PLEASE Help BALANCE Intensify our push for a Zero-Net Moratorium and the other Victory Initiative Positions!

Certain Well-Funded Cheap Labor Advocates on the Right, and Ethnic Power and Government Benefits Recipients on the Left, are pushing hard for further implementation of President Obama’s Mass Illegal Alien Amnesty, AND FOR MASSIVE INCREASES IN LEGAL IMMIGRATION, including Refugees and Asylees!

Only our Massive Grassroots Effort can stop them! Phone Calls or Office Visits followed by Snail Mail letters are most effective (emails are often ignored and fax machines can be turned off). And please consider that BALANCE is greatly outspent by the Cheap Labor Lobby and various Ethnic Power Lobbies.

BALANCE very much needs you to make a Tax-Deductible Donation TODAY. Dollar for Dollar, Donations to BALANCE and its ASAP! Coalition Allies who push a Moratorium, create much more Political Clout than Donations to Mass Immigration Management Groups.

So Please DONATE at our website: BALANCE.ORG or, to donate via U.S mail, please send to: Population-Environment Balance | P.O. Box 268 | San Francisco, CA 94104

BALANCE is anti-Mass-Immigration, not anti-immigrant.

BALANCE is the leading National Organization publicizing information regarding the
Threat of Mass Immigration-generated population growth to our Environment, Nation, Budgets, and Personal Safety and Mobilizing Activists to Reduce it.
Posted by Population-Environment Balance at 10:24 AM No comments: